Burj Al Arab is a luxury hotel located in Dubai, United Arab Emirates, at 321 m (1,053 ft) it is the fourth tallest hotel in the world. Burj Al Arab stands on an artificial island 280 m (920 ft) out from Jumeirah beach, and is connected to the mainland by a private curving bridge. The shape of the structure is designed to mimic the sail of a ship. Sometimes described as “the world’s only seven-Star hotel”, its star rating has been often debated.The beachfront area where Burj Al Arab and Jumeirah Beach Hotel are located was previously called Chicago Beach. The hotel is located on an island of reclaimed land 280 meters offshore of the beach of the former Chicago Beach Hotel. The locale’s name had its origins in the Chicago Bridge and Iron Company which at one time welded giant floating oil storage tankers on the site.The old name persisted after the old Hotel was demolished in 1997. Dubai Chicago Beach Hotel remained as the Public Project Name for the construction phase of Burj Al Arab Hotel until Sheikh Mohammed bin Rashid Al Maktoum announced the new name. Burj Al Arab was designed by architect Tom Wright of WS Atkins PLC.

The design and construction were managed by Canadian engineer Rick Gregory also of WS Atkins. Construction of the Island began in 1994. It was built to resemble the sail of a dhow, a type of Arabian vessel. Two “wings” spread in a V to form a vast “mast”, while the space between them is enclosed in a massive atrium. The architect Tom Wright said “The client wanted a building that would become an iconic or symbolic statement for Dubai; this is very similar to Sydney with its Opera House, London with Big Ben, or Paris with the Eiffel Tower. It needed to be a building that would become synonymous with the name of the country.”The architect and engineering consultant for the project was Atkins. Fletcher Construction from New Zealand was the lead joint venture partner in the initial stages of pre-construction and construction. The hotel was built by South African construction contractor Murray and Roberts and Al Habtoor Engineering.Several features of the hotel required complex engineering feats to achieve. The hotel rests on an artificial island constructed 280 m (920 ft) offshore. To secure a foundation, the builders drove 230 forty-meter (130 ft) long concrete piles into the sand. 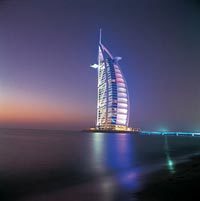 Engineers created a surface layer of large rocks, which is circled with a concrete honeycomb pattern, which serves to protect the foundation from erosion. It took three years to reclaim the land from the sea, while it took fewer than three years to construct the building itself. The building contains over 70,000 m3 (92,000 cu yd) of concrete and 9,000 tons of steel.

Burj Al Arab is the world’s second tallest hotel (not including buildings with mixed use). The structure of the Rose Rayhaan, also in Dubai, is 11 m (36 ft) taller than Burj Al Arab.The hotel is managed by the Jumeirah Group. Despite its size, Burj Al Arab holds only 28 double-story floors which accommodate 202 bedroom suites. The smallest suite occupies an area of 169 m2 (1,820 sq ft), the largest covers 780 m2 (8,400 sq ft).Suites feature design details that juxtapose east and west. White columns show great influence. Bathrooms are accented by mosaic tile patterns.

The hotel is officially rated Five-Star Deluxe. However, it is frequently described as “the world’s only seven-Star hotel”, although the hotel management claims to never have done that themselves. In the words of a Jumeirah Group spokesperson: “There’s not a lot we can do to stop it. We’re not encouraging the use of the term. We’ve never used it in our advertising.” According to the group, the “Seven-Star” notion was brought to being by a British journalist who visited the hotel on a pre-opening press trip. The journalist “described Burj al Arab in her article as above and beyond anything she had ever seen and called it a seven-star hotel.”