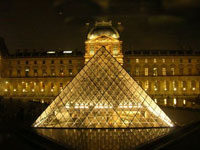 The Louvre Museum is one of the world’s largest museums, the most visited art museum in the world and a historic monument. A central landmark of Paris, it is located on the Right Bank of the Seine in the 1st arrondissement (district). Nearly 35,000 objects from prehistory to the 19th century are exhibited over an area of 60,600 square metres (652,300 square feet).

The museum is housed in the Louvre Palace (Palais du Louvre) which began as a fortress built in the late 12th century under Philip II. Remnants of the fortress are visible in the basement of the museum. The building was extended many times to form the present Louvre Palace. In 1682, Louis XIV chose the Palace of Versailles for his household, leaving the Louvre primarily as a place to display the royal collection, including, from 1692, a collection of antique sculpture. In 1692, the building was occupied by the Académie des Inscriptions et Belles Lettres and the Académie Royale de Peinture et de Sculpture, which in 1699 held the first of a series of salons. The Académie remained at the Louvre for 100 years. During the French Revolution, the National Assembly decreed that the Louvre should be used as a museum, to display the nation’s masterpieces.

The museum opened on 10 August 1793 with an exhibition of 537 paintings, the majority of the works being royal and confiscated church property. Because of structural problems with the building, the museum was closed in 1796 until 1801. The size of the collection increased under Napoleon and the museum was renamed the Musée Napoléon. After the defeat of Napoléon at Waterloo, many works seized by his armies were returned to their original owners. The collection was further increased during the reigns of Louis XVIII and Charles X, and during the Second French Empire the museum gained 20,000 pieces. Holdings have grown steadily through donations and gifts since the Third Republic. As of 2008, the collection is divided among eight curatorial departments: Egyptian Antiquities; Near Eastern Antiquities; Greek, Etruscan, and Roman Antiquities; Islamic Art; Sculpture; Decorative Arts; Paintings; Prints and Drawings.The Louvre Palace (Palais du Louvre) which houses the museum was begun as a fortress by Philip II in the 12th century, with remnants of this building still visible in the crypt. Whether this was the first building on that spot is not known, but it is possible that Philip modified an existing tower. Although some believe that the word ‘louvre’ may refer to the structure’s status as the largest in late 12th century Paris (from the French L’Œuvre, masterpiece) – or to its location in a forest (from the French rouvre, oak) – one finds in the authoritative Larousse that it derives from an association with wolf hunting den (via Latin: lupus, lower Empire: lupara).The Louvre Palace was altered frequently throughout the Middle Ages. In the 14th century, Charles V converted the building into a residence and in 1546, Francis I (François 1er ) renovated the site in French Renaissance style. Francis acquired what would become the nucleus of the Louvre’s holdings, his acquisitions including Leonardo da Vinci’s Mona Lisa. After Louis XIV chose Versailles as his residence in 1682, constructions slowed; however, the move permitted the Louvre to be used as a residence for artists.By the mid-18th century there was an increasing number of proposals to create a public gallery, with Lafont Saint-Yenne publishing, in 1747, a call for a display of the royal collection’. On 14 October 1750, Louis XV agreed and sanctioned a display of 96 pieces from the royal collection, mounted in the Galerie royale de peinture of the Luxembourg Palace. A hall was opened by Le Normant de Tournehem and the Marquis de Marigny for public viewing of the Tableaux du Roy on Wednesdays and Saturdays, and contained Andrea del Sarto’s Charity and works by Raphael; Titian; Veronese; Rembrandt; Poussin or Van Dyck, until its closing in 1780 as a result of the gift of the palace to the comte de Provence by the king in 1778. Under Louis XVI, the royal museum idea became policy. The comte d’Angiviller broadened the collection and in 1776 proposed conversion of the Grande Galerie of the Louvre – which contained maps – into the “French Museum”. Many proposals were offered for the Louvre’s renovation into a museum, however none was agreed on. Hence the museum remained incomplete until the French Revolution. 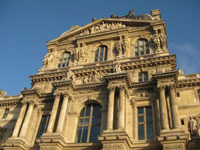 During the French Revolution the Louvre was transformed into a public museum. In May 1791, the Assembly declared that the Louvre would be “a place for bringing together monuments of all the sciences and arts”. On 10 August 1792, Louis XVI was imprisoned and the royal collection in the Louvre became national property. Because of fear of vandalism or theft, on 19 August, the National Assembly pronounced the museum’s preparation as urgent. In October, a committee to “preserve the national memory” began assembling the collection for display.The museum opened on 10 August 1793, the first anniversary of the monarchy’s demise. The public was given free access on three days per week, which was “perceived as a major accomplishment and was generally appreciated”. The collection showcased 537 paintings and 184 objects of art. Three quarters were derived from the royal collections, the remainder from confiscated émigrés and Church property (biens nationaux). To expand and organize the collection, the Republic dedicated 100,000 livres per year. In 1794, France’s revolutionary armies began bringing pieces from across Europe, such as Laocoön and His Sons and the Apollo Belvedere, to establish the Louvre as a museum and as a “sign of popular sovereignty”.The early days were hectic; artists lived in residence, and the unlabelled paintings hung “frame to frame from floor to ceiling”. The building itself closed in May 1796 because of structural deficiencies. It reopened on 14 July 1801, arranged chronologically and with new lighting and columnsUnder Napoleon I, a northern wing paralleling the Grande Galérie was begun, and the collection grew through successful military campaigns. Following the Egyptian campaign of 1798–1801, Napoléon appointed the museum’s first director, Dominique Vivant Denon. In tribute, the museum was renamed the “Musée Napoléon” in 1803, and acquisitions were made of Spanish, Austrian, Dutch, and Italian works, either as spoils or through treaties such as the Treaty of Tolentino. After the French defeat at Waterloo, the works’ former owners sought their return. The Louvre’s administrators were loath to comply and hid many works in their private collections. In response, foreign states sent emissaries to London to seek help, and many pieces were returned, even some that had been restored by the Louvre. In 1815 Louis XVIII finally concluded agreements with Italy for the keeping of pieces like Veronese’s Marriage of Cana which was exchanged for a large Le Brun or the repurchase of the Albani collection.During the Restoration (1814–30), Louis XVIII and Charles X between them added 135 pieces at a cost of 720,000 francs and created the department of Egyptian antiquities curated by Champollion, increased by more than 7,000 works with the acquisition of the Durand, Salt or second Drovetti collections. This was less than the amount given for rehabilitation of Versailles, and the Louvre suffered relative to the rest of Paris. After the creation of the French Second Republic in 1848, the new government allocated two million francs for repair work and ordered the completion of the Galerie d’Apollon, the Salon Carré, and the Grande Galérie. In 1861, Louis-Napoléon Bonaparte bought 11,835 artworks including 641 paintings of the Campana collection. During the Second French Empire, between 1852 and 1870, the French economy grew; by 1870 the museum had added 20,000 new pieces to its collections, and the Pavillon de Flore and the Grande Galérie were remodelled under architects Louis Visconti and Hector Lefuel.During the French Third Republic the Louvre acquired new pieces mainly via donations and gifts. The Société des Amis du Louvre donated the Pietà of Villeneuve-lès-Avignon, and in 1863 an expedition uncovered the sculpture Winged Victory of Samothrace in the Aegean Sea. This piece, though heavily damaged, has been prominently displayed since 1884. The 583-item Collection La Caze donated in 1869, included works by Chardin; Fragonard; Rembrandt – such as Bathsheba at Her Bath – and Gilles by Watteau.Museum expansion slowed after World War I, and the collection did not acquire many significant new works; exceptions were Georges de La Tour’s Saint Thomas and Baron Edmond de Rothschild’s (1845–1934) 1935 donation of 4,000 engravings, 3,000 drawings, and 500 illustrated books. During World War II the museum removed most of the art and hid valuable pieces. On 27 August 1939, after two days of packing, truck convoys began to leave Paris. By 28 December, the museum was cleared of most works, except those that were too heavy and “unimportant paintings [that] were left in the basement”. In early 1945, after the liberation of France, art began returning to the Louvre.

By 1874, the Louvre Palace had achieved its present form of an almost rectangular structure with the Sully Wing to the east containing the square Cour Carrée and the oldest parts of the Louvre; and two wings which wrap the Cour Napoléon, the Richelieu Wing to the north and the Denon Wing, which borders the Seine to the south. In 1983, French President François Mitterrand proposed, as one of the Grands Projets of François Mitterrand the Grand Louvre plan to renovate the building and relocate the Finance Ministry, allowing displays throughout the building. Architect I. M. Pei was awarded the project and proposed a glass pyramid to stand over a new entrance in the main court, the Cour Napoléon. The pyramid and its underground lobby were inaugurated on 15 October 1988. The second phase of the Grand Louvre plan, La Pyramide Inversée (The Inverted Pyramid), was completed in 1993. As of 2002, attendance had doubled since completion.

The Musée du Louvre contains more than 380,000 objects and displays 35,000 works of art in eight curatorial departments with more than 60,600 square metres (652,000 sq ft) dedicated to the permanent collection. The Louvre exhibits sculptures, objets d’art, paintings, drawings, and archaeological finds. It is the world’s most visited museum, averaging 15,000 visitors per day, 65 percent of whom are foreign tourists. In popular culture, the Louvre was a point of interest in the book The Da Vinci Code and the 2006 film based on the book. The museum earned $2.5 million by allowing filming in its galleries.